September in the Rain 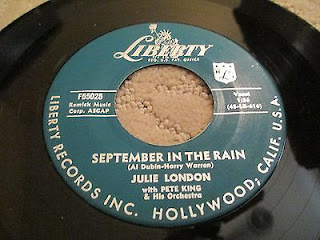 1) This song refers to "leaves of brown." Can you see any leaves outside your window? What color are they?

2) It also mentions whispered words of love. What did you say last time you lowered your voice?

3) Clearly this song is about a treasured romantic memory that took place in autumn. Think about your favorite romantic memory. In what season did it take place?

4) This week's featured artist, Julie London, was famous as a singer and actress. Less prominent in her bio is her appearance as a "pin up girl" in Esquire magazine when she was just 17. What's in your resume that you'd prefer to de-emphasize or gloss over?


5) Julie recorded more than 30 albums and was named "most popular female vocalist" by Billboard magazine in 1956. If you could see any entertainer -- male or female -- in concert, who would you choose?

6) She became well-known to another generation when she appeared in the 1970s TV show Emergency! The younger actors credited her for keeping everything calm on the set. Who has a calming influence on you?

7) Her Emergency! costar was her husband, Bobby Troup, and the show was produced by her ex-husband, Jack Webb. Do you have an ex that you're on very good terms with?

8) Julie was a chain-smoker since she was a teenager and in the 1950s recorded a jingle for Marlboro cigarettes. Yet in the 1970s, when she saw Bobby Troup's health negatively effected by smoking, she pressed him to quit. Tell us about a time you found yourself in a "do as I say, not as I do" situation.

9) Random question: You have won an all-expenses paid trip to an exclusive resort in the Hawaii. When you get there, you discover that the private beach is bathing suit optional. Do you swim nude?

Thanks so much!! See you Saturday!

How about those Cubs! Yeah!