Wake Me Up Before You Go-Go 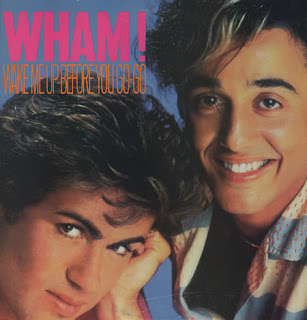 
Unfamiliar with this week's tune? Hear it here.

1) This song was inspired by a note WHAM! partner Andrew Ridgeley left for his parents. He accidentally wrote "go" twice. What was the last handwritten note you left for someone?


2) Born Georgios Panayiotou, George Michael was the son of the Greek restauranteur in East London. When you think of Greek cuisine, what comes to mind?

3) He was a terrible driver and admitted his license was suspended a number of times. Have you ever lost your license?

4) WHAM! partner Andrew Ridgeley, on the other hand, is a talented driver who got to live his fantasy by racing Formula Three in Monaco. There are companies that sell racetrack driving experiences that allow you to spin around the track at dizzying speeds. Is this something you like to try?

5) In 1990, Frank Sinatra famously gave George Michael advice. Ol' Blue Eyes told the younger man to enjoy his fame, to remember all those lean nights traveling from gig to gig by bus and, now that he's successful, "loosen up and swing, man." Who last gave you advice? Did you take it?

6) Mr.  Michael's neighbors have reported since his passing that he seemed to live rather quietly, and that they usually saw him when he was out walking his three dogs. Tell us about the last time you spoke to one of your neighbors.

7) Fansites tell us that George Michael's favorite cereal was cornflakes. What breakfast cereals are currently in your kitchen?

8) In 1984, when "Wake Me Up Before You Go-Go" was popular, Murder, She Wrote premiered on CBS. Today it's still seen in reruns all over the world. Are you a fan?


9) RANDOM QUESTION: What's your secret to a good night's sleep?

See you tomorrow! Thanks for continuing the fun in 2017!!

I can't tell you how much I absolutely ADORE this song!! Thanks for using it!