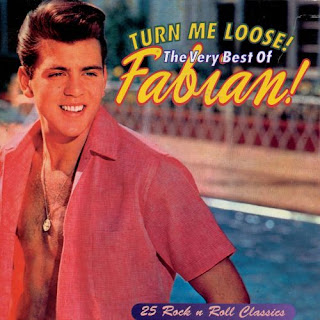 
1) In this song, Fabian sings he has change in his pocket. Every evening, Sam puts her change in the piggy bank on her kitchen counter. Do you do anything special with your coins? Or do they just jingle/jangle in your wallet or pocket until you spend them?

2) Fabian got his start because his neighbor in Philadelphia owned a record label and thought 14-year-old Fabian had the looks to be a teen idol. Tell us about a time recently when you were in the right place at the right time.


3) His record label paid Fabian $30 week to study singing after school. What jobs/chores did you have when you were in high school? Did they prepare you for your eventual career?

4) In 1959 he appeared on the cover of now-defunct magazines like Teen Screen and Dig. Who and what did you read about when you were a teenager?

6) In 1973, in an attempt to jumpstart his career, he appeared nude in Playgirl magazine. By the time it hit the newsstands, he regretted it.  Tell us about a time you were very embarrassed.

9) Random Question: While we're talking about TV ... Sam finds it disturbing that her brother claims he's seen every episode of Bad Blood, a show devoted to family members who have murdered their relatives. Do you enjoy "true crime" reality shows?

Thanks Sam! See you Saturday!