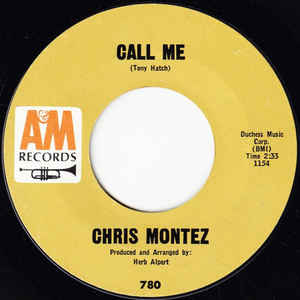 1) Chris Montez sings that you can always call him, regardless of the hour. Do you believe that it's ever too late to phone someone?

2) He insists that you can depend on him, even when your friends desert you. Who is someone you can trust to have your back, no matter what?


3) Billy Crystal serenades Meg Ryan -- via answering machine -- with "Call Me" in When Harry Met Sally. Answering machines have been replaced by voice mail. Who most recently left you a voice mail?

4) Chris Montez is a graduate of El Camino College in Torrance, California. The average daytime temperature in November in Torrance is 70º. How is the weather where you are today?

5) Today Chris actively promotes a healthy lifestyle to children. He was honored for his efforts by the group SOPA (Stop Obesity, Promote Activity). Do you believe you get enough exercise?

6) Released in late 1965, "Call Me" became a big hit in 1966, reaching #2 on the charts. Even though it sold millions of copies and was certified as a Gold Record, it never hit #1. Is winning, or being the best, important to you?

7) In 1966, when this was playing on juke boxes, kids were watching Batman and Star Trek. If you had your choice of watching an episode right now, which would you choose: Star Trek or Batman?

8) Also in 1966, celebrity chef Gordon Ramsay was born. Do you enjoy cooking?

9) Random question -- You have the opportunity to perform in the circus! Would you rather be shot from a cannon, or put your head in the lion's mouth?

Enjoyed doing this one. Mine is now online. :) Have a great weekend.

Thank you for these! I enjoy them.

Great questions! Have a fabulous week!