THE PERFECT FAN (1999)
Unfamiliar with this week's song? Hear it here. 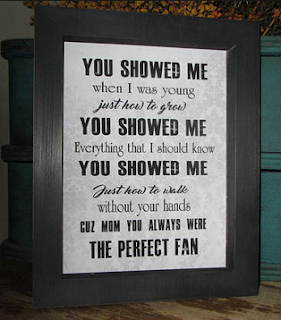 1) In this song, a son thanks his mother for helping him grow up strong and confident. Who is the last person you thanked? What did they do for you?

2) Who was the last person to thank you for something?

3) This is from the Backstreet Boys' album Millennium, recorded and released in 1999. Do you remember where you were and what you were doing when 1999 turned into 2000?

4) This song was written by Backstreet Boy Brian Littrell. Brian voiced himself on an episode of PBS' Arthur. Arthur has been described as an "animated anthropomorphic aardvark" -- which can be difficult to say. Do you easily get tongue tied?

5) The French word for "mother" is "mère." What other French words do you know?

6) Mother's Day is a big holiday for card shops. So are birthdays, weddings, and St. Patrick's Day. Hallmark sells greetings for everything from "Congratulations on Your New Job" to "Happy Retirement." Who received the most recent card you bought?

7) Have you put away your winter clothes yet?

8) Mother Winters used to scold Sam for leaving her dirty dishes in the sink. Sam admits it: as a grown up, she's still a bit of a slob. Do lean toward "neat" or "messy?"

9) To celebrate Mother's Day, Sam is giving away her mother's favorite: Hershey Bars. Would you prefer classic milk chocolate, dark chocolate or milk chocolate with almonds?