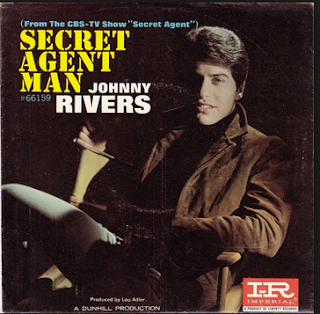 1) This is the theme of a TV show that ran on CBS from 1964-1967. The series was produced, and originally aired, in England. The BBC has shared many shows with American audiences over the years. Can you name another?

2) The show is about John Drake, a special agent dedicated to exposing plots that threaten world peace. A quick check of Netflix and Goodreads reveals that spy stories are just as popular today. Is espionage a genre you enjoy? Do you read books, or watch shows and movies, about spies?

3) The lyrics tell us Drake travels from the Riviera to Bombay. Where were you when you last spent the night away from home? Why were you there (vacation, business, international intrigue)?

4) The refrain states, "They've given you a number and taken away your name." In today's digital world, that could now be said of all of us. Are you good at remembering your computer passwords?

5) Patrick McGoohan, who played Agent Drake, went from being a good guy to appearing as a murderer on Columbo four times. Were you a fan of Columbo?

6) Born John Ramistella, this week's featured artist, Johnny Rivers, grew up in Louisiana. He took "Rivers" as his stage name because he grew up along the Mighty Mississippi. If you were to change your last name based on the geography of the area where you grew up, how would you be known?

7) In 1966, when this song was popular, Jacqueline Kennedy was the woman most Americans admired. What famous woman do you admire most? (She doesn't have to be American.)

8) 1966 also found another Jacqueline was in the news. Jacqueline Susann's first novel, Valley of the Dolls, was atop the best seller lists, even though it was savaged by the critics. What's your guilty pleasure? What book, movie, TV show, or song do you enjoy, even though you know it has little artistic merit?

9) Random question: Imagine you've been stranded alone in the woods for 10 days. No companionship, no internet or phone or TV. You have been sleeping in the dirt, living on berries and river water. Your rescuers drive you to a hotel. Upon check-in, what's the first thing you do?

Thank you for all the time and work you put into making the Saturday 9.

The Gal Herself said...

THANK YOU! And I do love how beautifully crafted your answers are, week in/week out. I'd let you know, but your blog doesn't accept Blogger comments!

Mine will post Saturday morning--I'll be out of town--if you wouldn't mind linking for me.