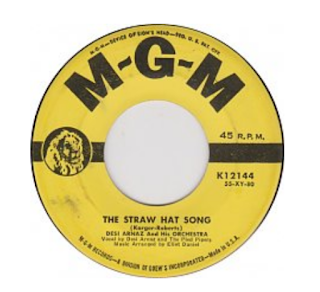 
1) In this song, Desi Arnaz encourages us to laugh and sing instead of concentrating on our troubles. Is this an approach to life you could adopt? Or are you a worrier?

2) Because Desi's public persona was carefree, people are often surprised to learn his early life was hard. In 1933, his wealthy family was targeted by Cuban revolutionaries. Their home was destroyed and were forced to flee the country. In Miami, they lived in a warehouse and 16-year-old Desi helped support the family by cleaning cages for the man who sold canaries outside a drugstore. Think about your friends and acquaintances. Whose life story turned out to be very different than you originally thought?

3) While still in his teens, Desi got his first job as an entertainer. As a boy in Cuba, he expected to be a lawyer, not a musician. He only began playing guitar because he noticed girls like musicians and he liked girls. Tell us about a hobby of yours, and what inspired you to pick it up.

4) He discovered he was not only a talented musician but a natural leader. By the tender age of 19, he had organized The Desi Arnaz Orchestra and they were performing in Miami hotels. Have you ever been a boss? If so, did you enjoy it?

5) When he was 23, he went to Hollywood to try his hand at movies and met a 28 year old actress named Lucille Ball. In Hollywood back in 1940, it was considered embarrassing for a woman to date a younger man. Their initial attraction was so powerful she quickly got over it. Do you think age matters when it comes to romance?

6) Desi was the first person to call that famous redhead "Lucy." Throughout her entire life, friends, family and coworkers always referred to her as "Lucille," as she preferred. But Desi insisted on "Lucy." He said that name was his and his alone. Ironically it became the way the world referred to her. Do you have a pet name for anyone?

7) Lucille and Desi named their son and daughter after themselves. Were you named after anyone?

8) Desi was the founding force behind Desilu. One of the first great production studios of the television age, Desilu grossed $15 million in 1957 (more than $135 million in today's dollars). He credited his success to his unconventional and creative approach to problems. Are you a good problem solver?


9) Random question: Who annoys you more, a know-it-all or an ignoramus?

I had never heard this song. Here is a link to my post though.
https://slatersfunnyfarm.blogspot.com/2019/09/the-straw-hat-song-saturday-9.html

Thanks for doing these. I really enjoy them. Mine goes up tonight.