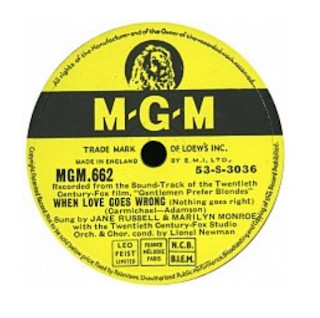 
1) This is from the movie Gentlemen Prefer Blondes. Have you seen it?

2) The lyrics tell us that, when love goes wrong, "a match won't light." When did you most recently light a match?

3) The duet is performed at a French sidewalk cafe, where Jane Russell and Marilyn Monroe are (literally) sharing a cup of coffee. With whom did you most recently have coffee?

4) The tune was written by prolific composer Hoagy Carmichael. He was influenced by his mother, who earned extra money for the family playing piano during silent movies. Who in your life influenced your career choices?

6) Jane and Bob Waterfield were high school sweethearts at Van Nuys High. The Southern California school was used as a set for the 1982 movie, Fast Times at Ridgemont High. Tell us something about your high school.

7) Marilyn and Joe DiMaggio met on a blind date at a Hollywood restaurant called Villa Nova. Have you ever arranged a blind date? If so, did the couple hit it off and end up dating?

8) In 1953, when Gentlemen Prefer Blondes was released, a tornado did severe damage to Waco, TX. Tell us about a major weather event that you endured (tornado, hurricane, flood, blizzard, heat wave, etc.).

9) Random question: You see a filthy puddle. Floating on top are cigarette butts, a leaf, and a $1 bill. Would you bend over and rescue the dollar?

PS Sorry for the duplicate posts this morning. I was fighting with my computer and the computer won!
Posted by The Gal Herself at 7:46 AM

Is this the one for this week, or is it Beautiful People?

The Gal Herself said...

Sorry, Songbird! I forgot about Father's Day and had to rearrange some posts to accommodate the upcoming special occasion. I'm afraid I wasn't paying close attention to what I was doing. Apologies.

I'll be traveling up to the cottage Saturday to check on the progress of the addition, up and back in the same day. A lot of driving but hopefully only for a few more weeks.

Thanks! See you tomorrow!