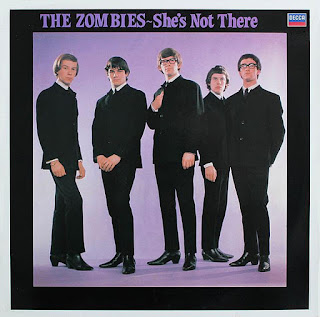 
1) This song is about a young man who is upset his friends didn't warn him against a girl who turned out to be untrue. Have you ever involved yourself in a friend's love life with advice about a relationship?

2) According to legend, this song was inspired by a girl who called off her wedding just weeks before the ceremony, humiliating her fiance and breaking his heart. Do you know anyone who was similarly left at the altar?

3) The Zombies first played together as a bar band, popular at an English pub called The Blacksmiths Arms. What's the name of your favorite local restaurant or bar?
4) The Zombies broke up after a few years but put all acrimony behind them in 2019 when they reunited to perform at their induction into The Rock and Roll Hall of Fame in Cleveland. Have you ever been to Ohio?
5) While 1964 is remembered as the first year of the British Invasion, when rock bands from the UK dominated the airwaves, it was also the year Barbra Streisand became a major star, featured on the covers of both Time and Life. Are there any magazines in your home right now? If so, who is on the cover?

6) Also in 1964, actress Ena Hartman became one of the first African American actresses to have a speaking part on the country's top TV Western, Bonanza. Is your TV on right now, as you answer these 9 questions?

7) The "It's a Small World" ride was introduced at the 1964 New York World's Fair. It's now at Disneyland, Disney World, Disneyland Paris and Disneyland Hong Kong. Have you ever taken one of these Small World rides?

8) General Douglas MacArthur's memoir was published shortly before his death in 1964. It became a best seller. Was the last book you finished fiction or non-fiction?

9) Random question: You find yourself calling the local garage often to get updates on your car repair. Every time you call, the person who answers the phone is abrupt to the point of rude. Do you: (1) let the person know you'd appreciate a change in tone; (2) ignore it; (3) complain to the boss?