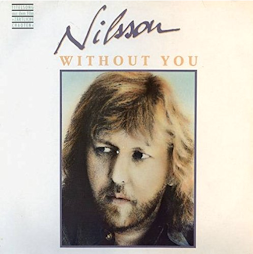 Welcome to Saturday: 9. What we've committed to our readers is that we will post 9 questions every Saturday. Sometimes the post will have a theme, and at other times the questions will be totally unrelated. Those weeks we do "random questions," so-to-speak. We encourage you to visit other participants posts and leave a comment. Because we don't have any rules, it is your choice. We hate rules. We love memes, however, and here is today's meme!
Without You (1972)

1) Nilsson sings that he can't forget this evening. Did anything happen this evening (or last night, if you're answering during the day) that you expect you'll recall for a long time?

2) In the 1960s, he worked in a very "un-rock-star" job: computer programmer in a bank. Looking over your career, have you more often worked in or out of an office setting?
3) He fibbed to get the job, telling the bank he'd graduated from high school when in reality, he was a drop out. Have you ever fudged a fact on your resume?
4) The bank found out the truth but was so pleased with Nilsson's personality and performance they kept him on. Tell us about a friend or loved one's misbehavior that you have overlooked.

5) Before finding success as a singer, Nilsson was a songwriter. He composed "Cuddly Toy," recorded by the Monkees. Do you have a favorite Monkees song?
6) In 1976 Nilsson married Una O'Keeffe. They met in a New York restaurant, where she was a waitress. He asked her about her accent -- she was from Dublin -- and a romance ensued. While the waitress and the rock star seemed like an unlikely couple, they remained together until his death in 1994 and had six children. Do you know how your parents (or grandparents) met?
7) Nilsson was a night owl and found he felt most creative late at night, right before he fell asleep. When are you at your best: morning, noon or night?

8) In 1972, the year "Without You" was a hit, Alice Clark Browne made history as the first African American aerialist to perform with Ringling Brothers and Barnum Bailey Circus. Did you ever attend the circus?
9) Random question -- Think about last week. Would you prefer this week to be more exciting, or more boring?