In the Wee Small Hours 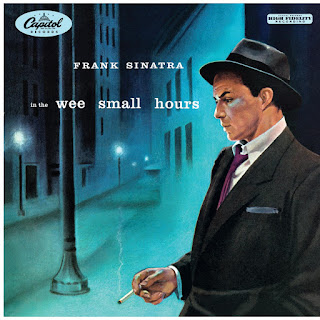 
Saturday 9: In the Wee Small Hours

1) Crazy Sam's mom and dad still talk about how exciting it was to see Sinatra in Vegas! What music did/do your parents enjoy?

2) We all know Sinatra sang, and he won an Oscar for his acting. But he also painted and was proud to sell a few canvasses anonymously (signed "Artanis"). Do you have a secret talent?

3) Those close to Sinatra maintained that every time he sang,"In the Wee Small Hours" (hear him perform it live here) he conjured up how it felt to lose his great love. Have you ever had your heart broken?

4) In 1966, when he was 50, Sinatra married 21 year old Mia Farrow. Their union lasted less than two years. Do you think a wide age gap necessarily dooms a romantic relationship?

5) Offstage Sinatra wore orange sweaters and liked seeing orange throw pillows in his home and dressing room because he believed "orange is the happiest color." What color raises your spirits?

6) Frank and his loyal buddies were famously known as "The Rat Pack." How many people do you consider close friends?

7) Sinatra's children followed their father into show business. What advice would you give a young person entering your career of choice?

8) Legend has it that Frank was embarrassed by a scar on his face (received at birth from the forceps used in his delivery) and worked hard to cover it. Do you have a physical characteristic that you try to hide?

9) In 1964, when he first heard The Beatles, Sinatra was very dismissive. By 1970, he called the Beatles' "Something" one of the most beautiful ballads ever. Tell us about something you changed your mind about.