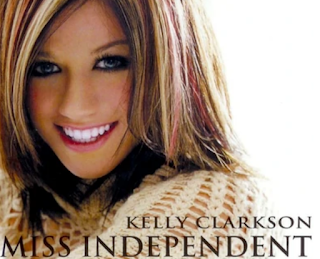 1) The song begins with Kelly describing a woman who is "independent" and "self-sufficient." Are you feeling especially independent and self-sufficient this morning? Or is there a particular task on your to-do list that you wish you had help with?

2) Kelly especially enjoys that this song was a hit, because she had to argue with the record company to even include it on her album. Tell us about a time you're glad fought to get your way.

3) The video depicts a very lively party that spills from the house to the pool area. What's the last party you attended? Was it held indoors, outdoors, or did the revelers enjoy themselves both inside and outside?

5) Kelly Clarkson has a new daytime talk show. Who hosted the last entertainment talk show (as opposed to news) that you watched?

6) Kelly Clarkson told a foodie website that one of her favorite foods is sushi (especially California rolls). She said she's surprised how fond she is of it, since as a kid, sushi is a food she wouldn't even try. Tell us about something you had to be convinced to try, or do, that you were surprised to find you enjoyed.

7) In 2003, when "Miss Independent" was released, Microsoft and Sony were furiously competing for gamers' attention. Do you own Playstation or Xbox, neither or both?


8) Also in 2003, the best-selling cookbook was The King Arthur Flour Baker's Companion. It features foolproof recipes for old favorites like waffles, pancakes, flat breads and crackers. When you look for a new recipe, are you searching for an easier/better way to make something familiar, or are you more likely looking to try something new?

9) Random question: Which has gotten you in more trouble -- love or money?

Hi Sam--I'm going out of town (again!!!) and would be ever so grateful if you'd post my linky.

Mine will be up Sat morning. Thank you for these :)

As claimed by Stanford Medical, It is really the one and ONLY reason women in this country live 10 years more and weigh 19 kilos lighter than us.

(And really, it is not about genetics or some secret exercise and EVERYTHING to do with "HOW" they are eating.)

A big thanks to Dr Oselumen i never believe that there still exist a real death spell caster after all this years of disappointment from the enormous spammers on the Internet who go about scamming people, until i was opportune to meet Dr Oselumen a real spell caster, through a close friend called Jennifer who Dr oselumen had helped before, when i contacted him with his email via droselumen@gmail.com i explain how my ex have been giving me problem in my marriage, she never allowed me a moment of peace, and i need to end it by killing her, and i don't want to make use of assassin because it will be risky so i needed to do it in a spiritual way that's why i decided to contact him, he assured me not to worry as i have contacted the right person at the right time, i co-operated with him and in less than a week my ex was dead, she slept and never woke up all thanks to Dr Oselumen indeed he's really a humble man. you can contact dr oselumen for any death spell, such as to kill your superior in the office and take his or her place, death spell to kill your father and inherit his wealth ,death spell to kill anyone who have scammed you in the past ,spell for increase in salaries, spell for promotion at the office, spell to get your ex lover back, if things is not working well in your life then you need to contact him now via Email droselumen@gmail.com call or add him on whatsapp +2348054265852.

About Saturday 9 - Our Lucky 13th Anniversary

Hi! I'm your host Sam Winters. Memes are probably the downfall of civilization. However, we LOVE them! We recognized a void of Saturday memes once Sat-8 exited. So in 2007, we decided to create our own meme for your pleasure once a week. We've gone from a modest start to become Saturday's Favorite Meme. It's crazy but this is our 13th Anniversary Year. We are the FIRST meme created by WTIT! And we are the older sister to Sunday Stealing. (To contact WTIT, the email address is bud.weiser@wtit.net) Please "add your link" when your responses are up! Make friends by leaving comments. We are SO lucky to have awesome regular players.