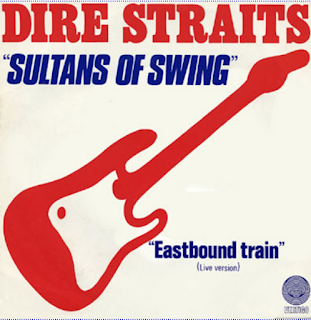 1) The song begins by mentioning how it feels to shiver on a rainy night. As you answer these questions, is it chilly ... or rainy ... or dark?

2) The lyrics describe a bar at closing time, when the owner announces, "Goodnight, now, it's time to go home." Can you recall a time when you lingered until you closed the joint?

3) This song was written years before it was recorded, back in the days before Dire Straits was a success. Composer/lead singer/lead guitarist Mark Knopfler recalls that, when he was working on "Sultans of Swing," he was worried about paying his gas bill. Is anything troubling you this Saturday?

4) When this song was popular, Sam often played it on the jukebox because, well, who doesn't like Dire Straits? 40 years later, both that  jukebox and the bar it was in are gone. Have you recently been in a restaurant or bar that has a jukebox?

5) In 1978, the year "Sultans of Swing" topped the charts, Garfield first appeared in newspapers all around the United States. Over the years, it was revealed that the cartoon cat loved lasagna and hated raisins. What's a food you love? What's one that you hate?

6) One of People magazine's top-selling issues of 1978 featured Carrie Fisher and Darth Vader on the cover. The article celebrated the theatrical re-release of Star Wars and announced that the cast was on board for a sequel. How many Star Wars movies have you seen?

7) The most popular movie of 1978 was Grease. What's your favorite song from the Grease soundtrack?

8) In 1978, Yves St. Laurent made fashion news by putting his female runway models in menswear-inspired suits, complete with neckties and pocket squares. Do you know how to tie a windsor knot? Can you fold a handkerchief into a pocket square?

9) Random question: You're visiting a friend. He graciously offers you the use of his super-expensive, brand-new luxury sedan for the duration of your stay. Do you take him up on it? Or do you rent a car instead?

Mine goes up Saturday AM

I have been busy the last couple of weekends, I should be back next Saturday.