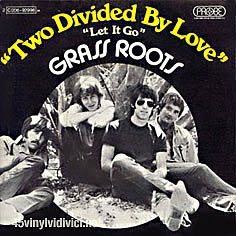 
Unfamiliar with this week's song? You can hear it here.

1) Sam's teacher told her she'd use math every day. What's the last math problem you solved? (Did you add to/subtract from the balance of your checkbook ... use division to figure out how much you'd save with 25% off that sweater ...)

2) The lyrics tell us that if you take away the rain from a flower, the flower just won't grow. Do you have any indoor houseplants? Could they use a drink of water this morning?

3) This week's artists, The Grass Roots, are introduced in this video by country music superstar Kenny Rogers. Who is your favorite country music singer?

4) The two unmarried members of the group -- guitarist Warren Entner and drummer Ricky Coonce -- competed for a lady's affection on a 1968 episode of The Dating Game. Neither of them won! She chose Bachelor #1. Anyway, have you ever appeared on a game show? Do you know anyone who has?

5) The Grass Roots were originally called The 13th Floor. They chose this cheeky name because many high rises do not have a 13th floor since 13 is considered an unlucky number, and they were thumbing their noses at superstition. Are you superstitious?

6) At the time of his death in 2011, group leader Rob Grill was still playing music, touring with a reconfigured Grass Roots. His widow Nancy referred to him as "one lucky son of a gun" because he'd been able to support himself as a musician, doing what he loved for 45 years. In what ways do you consider yourself fortunate?

7) In 1971, the year this song was released, Walt Disney World opened in Florida. The Epcot Center was added in 1982. Have you ever visited this, or any, Disney theme park?

9) Random question: Do you work well under pressure?

Mine will be up Sat morning