Welcome to Saturday 9. What we've committed to our readers is that we will post 9 questions every Saturday. Sometimes the post will have a theme, and at other times the questions will be totally unrelated. Those weeks we do "random questions," so-to-speak. We encourage you to visit other participants posts and leave a comment. Because we don't have any rules, it is your choice. We hate rules. Now on to this week's questions.

Little Things (1964)
Unfamiliar with this week's tune? Hear it here. 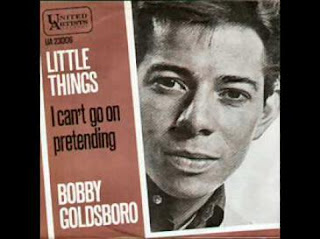 1) In this song, Bobby Goldsboro celebrates the "little things" that delight him, like seeing his girl smile. What are some little every day things that reliably lighten your mood?

2) Bobby is a lifelong sports fan. While in high school, he came to terms with physical limitations -- slender build, slow speed -- that would prevent him from having a career as a professional athlete. That's when he turned his attention to music. Given your choice, would you rather make your living in music or sports? Explain your decision.

3) Shortly before "Little Things" was released, Bobby toured England for two weeks, backing up Roy Orbison. They opened for The Beatles. Bobby fondly recalls spending time with Paul McCartney, teaching him how to imitate the croak of an Alabama tree frog. Are you good at imitations (human or otherwise)?

4) Back in the States, Goldsboro (again with Orbison) opened for the Rolling Stones in New York. Which band did you listen to more recently, the Stones or the Beatles?

5) Bobby worked on projects with Burt Reynolds, doing the music for the movie Gator and the TV show Evening Shade. Burt said it was not only Bobby's musical ability but also his wit that made him fun to work with. What qualities do you value in a coworker?

6) These days, Bobby spends more time painting than performing music. He regularly donates his artwork to be auctioned off for charity. Have you ever tried your hand at painting?

7) In 1964, when this song was on the radio, women spent more on styling gels and sprays than they do today. Are you having a good hair day? Or has the pandemic made dealing with your hair something of an adventure?

8) Nationally and internationally, one of 1964's biggest news stories was the marriage of Elizabeth Taylor and Richard Burton. The bride wore a yellow dress and white and yellow flowers in her hair. The groom was decked out in a sedate dark suit with a red tie and a yellow boutonniere. What did you wear the last time you got really dressed up?

9) Random question: Imagine you're stranded on a desert island with a complete stranger. Would you prefer your one and only companion be a man or a woman?

Thanks, Sam!! See you Saturday morning.