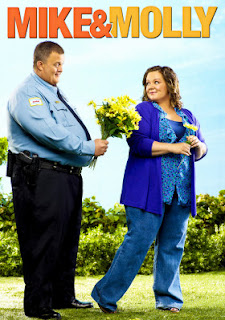 2) Molly was played by Melissa McCarthy. Today she's one of Hollywood's best-paid actresses, but when she began her career, she was barely scraping by. She recently recalled the time when, as a struggling actress, she was rejected at the ATM because it only gave out $20s and she didn't have even that much in her checking account. How often do you visit the ATM? Several times a week? Several times a month? Never?

3) When she was broke, Melissa couldn't afford blueberries and avocados.  Now she savors them. When you're a few bucks ahead, what do you splurge on?

4) Mike was played by Billy Gardell. He was working at a comedy club, cleaning the bathrooms and answering the phone. He used to crack jokes with other employees and finally one of his coworkers dared him to go onstage on "open mic night." A comedy career was born. Tell us about someone who pushed you to make the right move.

5) On the show, Mike's best friend was his fellow officer, Carl McMillan. Carl was not especially motivated and still lived with his grandmother, well into his 30s. How old were you when you moved out of the house for good?


6) Mike's and Molly's mothers are different as night and day and frequently did not get along. Have you ever had in-law trouble?

7) This week's song was written by Keb Mo. He switches among several different guitars when he works -- electric, acoustic and resonator. Can you play guitar?

8) In 2010, when this show premiered, Apple introduced the iPad. Do you use a tablet?

9) This week's random question gives you an opportunity to brag: What's something you do better than most people?

THank you, Sam! Always fun. Mine will post Saturday morning!