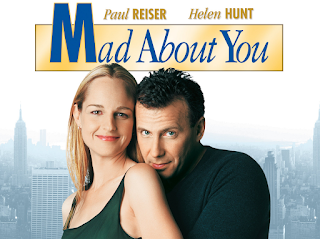 Welcome to Saturday 9. What we've committed to our readers is that we will post 9 questions every Saturday. Sometimes the post will have a theme, and at other times the questions will be totally unrelated. Those weeks we do "random questions," so-to-speak. We encourage you to visit other participants posts and leave a comment. Because we don't have any rules, it is your choice. We hate rules. We love memes, however, and here is today's meme.

3) The series revolved around Manhattan newlyweds Paul and Jamie Buchman. They met at a newsstand, where they were both purchasing The New York Times. With so many publications online, newsstands are now uncommon. When you want to purchase a printed newspaper or magazine, where do you go?

4) Paul is played by Paul Reiser. He created the series because he believes marriage is a tough but satisfying adventure. He and real-life wife Paula have been married for more than 30 years. They met when she was a waitress at the comedy club where he was performing. Have you ever waited tables?

5) Helen Hunt won four Emmy Awards as Jamie. Over 10 million people watch the Emmys each year. She also won an Oscar, which has an annual viewership of twice that. Therefore huge audiences witnessed Helen's acceptance speeches. Are you comfortable speaking in public?

6) During the opening credits, Paul and Jamie are sharing an ice cream bar. When did you most recently have ice cream?

8) In 1992, when Paul and Jamie were playing New Yorkers, real New Yorkers were following the trial of mobster John Gotti. Mr. Gotti acquired many nicknames, including The Teflon Don, The Dapper Don and Black John. Is there anyone in your life that you call by a pet name or nickname?

9) Random question  -- What subject do you wish you knew more about?