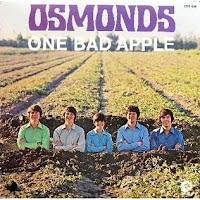 Welcome to Saturday: 9. What we've committed to our readers is that we will post 9 questions every Saturday. Sometimes the post will have a theme, and at other times the questions will be totally unrelated. Those weeks we do "random questions," so-to-speak. We encourage you to visit other participants posts and leave a comment. Because we don't have any rules, it is your choice. We hate rules. We love memes, however, and here is today's meme

One Bad Apple (1971)
Unfamiliar with this week's tune? Hear it here.

1) This song is a play on the old saying that one bad apple can spoil the bunch, or that the bad behavior of one member can reflect badly on the whole group. Do you think that's true?
2) The Osmonds began as The Osmond Brothers, a barbershop quartet that performed at the original Disneyland in Anaheim, California. Today there are 9 Disney Resorts all around the world, as far away as Shanghai. Have you ever been to a Walt Disney property?
3) By the time the Osmonds made this record, Donny had joined the group and became their breakout star. Without looking it up, can you name any of the other four brothers who performed in video clip?
4) In the 1970s, adolescent girls learned through teen magazines that Donny's favorite color is purple, and that he was especially fond of purple socks. Today, socks are a very big business. There are designer sock manufacturers and even a sock of the month club. Is there a wardrobe item you're very particular about?
5) Donny and younger sister Marie had their own TV variety show. One regular segment had them performing a medley of popular songs, and it began with Marie singing, "I'm a little bit country," followed by Donny's musical reply, "I'm a little bit rock and roll." In this regard, are you more like sister or brother?
6) Donny's popularity continues today. Fans have seen him win Dancing with the Stars (season 9) and come in as a runner up on the first season of The Masked Singer. Do you watch either of these shows -- or other competition series, like American Idol, The Voice, America's Got Talent, etc.?

7) Donny has also appeared on Broadway. He surprised audiences and got rave reviews as arrogant bad guy Gaston in Disney's Beauty and the Beast. Tell us about a time when your behavior surprised those who know you well.

8) Donny is also a grandfather, many times over! Sam admits she's not crazy about that revelation because it makes her feel old. What's something that makes you feel your years?

9) Random question: We're filling a pinata with your favorite candies. What should we buy?

Interesting questions! I feel like I barely recognize the Osmond name, but don't know much more. I kinda want to go find out! Interested to see other people's answers. Thanks!