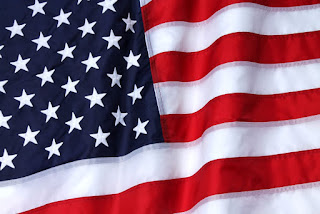 1) An early handwritten manuscript of "The Star Spangled Banner" (complete with scratch outs) is preserved at the Maryland Historical Society. Today, much of what we write is preserved in The Cloud. Do you often write down your thoughts with pen or pencil? Or do you do everything on your laptop, pad or phone?

2) It's well-known that the lyrics were written by Francis Scott Key. Not so well known is John Stafford Smith, the British composer who gave us the music. He is buried in England's Gloucester Cathedral, under both the US and UK flags. Where is the nearest United States flag waving near you right now?

3) This week's video features Lady Gaga singing The National Anthem before the 2016 Super Bowl. She also performed it at President Biden's Inauguration last January. When is the last time you sang it?

4) Our second and third Presidents, John Adams and Thomas Jefferson, both died on July 4, 1826. OK, it's your turn. Share a Presidential fact.

5) John Hancock said his signature on the Declaration of Independence was intentionally large so King George could see it without his glasses. Do you need glasses to read?

6) The Revolutionary War still raged during that summer of 1777. General George Washington allowed his soldiers to celebrate with a double ration of run on July 4. Will you be toasting the United States with an adult beverage this weekend?
7) Since this year, July 4th falls on a Sunday, banks and post offices will be closed will be closed on Monday. Thanks to email and ATMs, Sam doesn't find this a hardship. How about you? Do you find it inconvenient to go an extra day without regular USPS delivery or access to a teller at the bank?

8) Celebrity chef Rachael Ray says she considers mini-hamburgers, or "sliders," the All-American food. What will you be eating this 4th of July?

9) The 4th of July is a highlight of the summer season. Have you yet suffered the traditional warm weather maladies: sunburn or bug bites?

Thanks so much!! xo