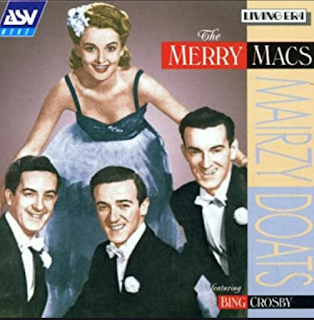 1) While today this is considered a children's song, "Mairzy Doats" was a #1 hit and a staple on radio stations in 1944. Do you know any of today's most popular songs? (Here's this week's Hot 100.)

2) One of the song's writers recalled that the song was inspired by an old English nursery rhyme. Tell us a rhyme you remember from childhood.

3) This week's group, The Merry Macs, was formed by three brothers -- Judd, Joe and Ted McMichael -- who learned to harmonize at home. Did you grow up in a musical household?

4) When the McMichaels decided their new group needed a woman's voice, they asked Cheri McKay to join them. Realizing all their names began with Mc, they began calling themselves The Merry Macs. Have you ever performed with a singing group? (Yes, that garage band you played in after school counts.) If yes, what was your band called?

5) The Merry Macs' first gigs were playing high school dances. Do you have any memories of school dances you'd like to share this morning?

6) Once their recording career took off, The Merry Macs went to Hollywood. They appeared in a film with the comedy team of Abbott and Costello. Who last made you laugh?

7) In 1944, when "Mairzy Doats" topped the charts, sunscreen was invented. It was first developed to protect soldiers during WWII, and that original formula was sold to Coppertone. Do you regularly use sunscreen?

8) Also in 1944, a board game called Murder! was introduced in England. In 1949 it made its way to the United States and was renamed Clue. It's still popular today. Can you name any of the original 6 "characters" in the Clue game? (Extra credit: One was replaced in 2016; who was it?)

9) Random question: The new house you just bought comes with a big mirror on the ceiling of the master bedroom. Would you take it down or leave it there?

Thank you!! I happen to love this song from my childhood and know all the words! xo