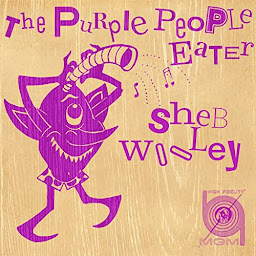 
1) When actor Sheb Wooley brought this song to MGM Records, they initially rejected it, saying it just wasn't the kind of thing they wanted to be associated with. Then executives discovered how popular the audition recording was with the 20-somethings in the office. MGM released it after all and it became a #1 hit. Tell us about a time you were glad you changed your mind about something.

2) This song has been so enduringly popular that in the 1970s, the Minnesota Vikings defensive line referred to themselves as the Purple People Eaters. What football team do you root for?


3) The song was initially inspired by Sputnik, the satellite launched by the Soviet Union in 1958. In the 21st century, do you think space exploration is a worthwhile public investment? Or would you prefer  governments spend that money here on earth?

4) The Purple People Eater is a visitor from another planet. When you imagine creatures from outer space, are they frightening or friendly?


5) This record was the biggest hit Sheb Wooley ever had. He was better known as an actor, costarring with Clint Eastwood on the 1950s TV show, Rawhide. What's your favorite Clint Eastwood movie?

6) Sheb and Clint remained buddies and appeared together decades later in The Outlaw Josey Wales (1976). Tell us about one of your longest-lasting friendships.

7) In 1958, when this song was popular, hula hoops were a national craze. Did you ever play with a hula hoop? If yes, were you good at it?


8) Also in 1958, Arnold Palmer won his first Masters Golf Tournament. When did you most recently play golf?


9) Random question: Do you believe women gossip more than men?