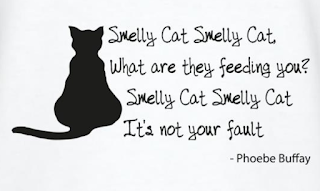 1) Poor Smelly Cat lives with negligent humans who refuse to take it to the vet. Who is the last doctor you spoke to (vet, MD, dentist, PhD ...)?
2) This song was introduced during the second season of Friends. Were you a fan of the show?

3) On the show, the song was performed by Phoebe Buffay (Lisa Kudrow), an amateur folk singer and a professional masseuse. There  was a debate on Reddit about massages -- some loved them because they are relaxing and therapeutic, others think it's "creepy to be undressed and handled by a stranger." How about you? Do you enjoy massages?
4) During the run of Friends, Phoebe was roommates first with Monica and then with Rachel and finally with her true love, Mike. Tell us about one of your roommates.
5) Phoebe often performed for tips on street corners or at her favorite coffee shop, Central Perk. Where is your favorite place to go for a cup of joe?

6) This song was originally called "Smelly Dog," inspired by a pooch named Gouda. The childhood pet of Friends writer Betsy Borns, poor Gouda could have smelled better. Is there an odor you'd prefer to never smell again?
7) 35% of American households include a cat. Are there any pets at your house?
8) In 1995, the year Phoebe first performed "Smelly Cat," Steve Fossett became the first person to make a solo flight across the Pacific in a hot air balloon. Have you ever ridden in a balloon?
9) Random question: Looking over your romantic history, have you broken more hearts, or had your heart broken more often?