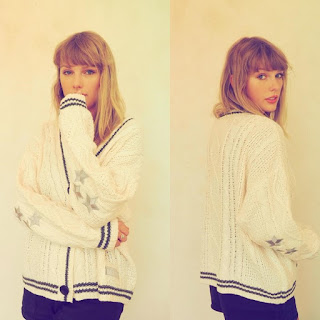 Saturday 9: Cardigan (2020)
Unfamiliar with this week's tune? Hear it here.

1) When she's feeling low, Taylor Swift compares herself to an old cardigan, forgotten under the bed. Do you store anything under your bed? Or do you try to keep that area clear (except for dust bunnies)?

2) The lyrics begin with a reference to a new phone. Do you foresee yourself getting a new phone before 2021 ends? Or are you happy with the one you've got?

3) She sings that her lover haunts all of her "what if's." Have you recently wondered, "what if?" What were you musing about?

4) Taylor Swift admits that she rewinds after concerts by watching Friends reruns. What do you do to relax?


5) Thinking of TV shows, Taylor appeared on a 2009 episode of CSI. That series was about crime-scene investigators who use forensics to solve murders. Do you enjoy crime shows?

6) Taylor grew up on an 11-acre tree farm where she learned to ride. Her mother was a horsewoman and hoped riding was a passion they could share. When she was 12, Taylor admitted to her mother that she really wasn't that into it and wished she could spend more time on her music. Her mother was supportive. Tell us about a tough conversation you've had that turned out well.

7) She enjoys good, old-fashioned mysteries, especially those by Agatha Christie. Are you currently reading a book?

8) In 2020, the year this song was released, Jeopardy host Alex Trebek died. The search for a new host has caused interest and even controversy. Would you enjoy the job?

9) Random question: Of Superman's three superpowers -- tremendous strength, the ability to fly, and x-ray vision -- which would you choose?