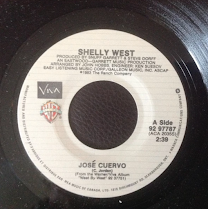 Saturday 9: Jose Cuervo (1983)
Unfamiliar with this week's tune? Hear it here.
1) In this song, Shelly West sings that she woke up late on a sunny morning. How's the weather in your part of the world?

2) She wonders if she started any fights while under the influence. Who's the last person you quarreled with?

3) OK, margaritas for everyone! Shelly sings that she likes hers with salt. What's your order? Classic or strawberry? Salt or sugar on the rim?

4) Jose Cuervo was a real person. He was one of the first to put tequila in bottles instead of barrels. Since bottles are easier to ship, it was a good decision. Tell us about a recent choice you're glad you made.
5) This week's featured artist, Shelly West, decided upon a career in music while still very young. She went on the road and sang backup for her mom, country music legend Dottie West, when she was still in her teens. When Sam was in her teens, she really didn't give her professional future that much thought. How about you? Did you already have career ambitions when you were in your teens?
6) In 1983, the year this song was popular, Sally Ride became the first American woman in space. Do you ever fantasize about being an astronaut?

7) Also in 1983, quarterback Aaron Rodgers was born. The NFL season is just kicking off. Do you have high hopes for your team this year?
8) In 1983, Motorola introduced the first cell phone. Do you have an easy time adapting to new technology?
9) Think of the last potato chip you had. Was it plain, sea salt, barbecue, sour cream and onion ...?