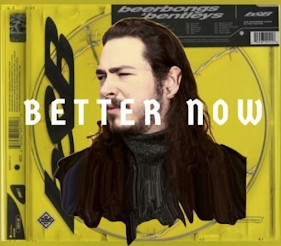 1) In this song, Post Malone tries to assure his ex that he's better now ... but he's not. He's still hurting. Have you recently told someone you were fine when you weren't?
2) He and his girl were so close he introduced her to his extended family, and now his aunts and uncles wonder where she's gone. Have you remained close to an ex's friends/family?
3) He sings that he never meant to let her down. What about you? Have you recently encountered anything -- big or small -- that didn't live up to your expectations?
4) Post recently announced he will soon become a father for the first time. Do you know anyone who is currently expecting a baby?
5) Before making it big as a musician, he supported himself as a wedding DJ. Think back to the last wedding you attended. Did they have a live band or a DJ?
6) Not satisfied being a successful musician, Post has branched out and introduced his own rose wine, Maison No. 9. Will you replenish your beer/wine/spirits this weekend?
7) Post Malone has more than 70 different tattoos. He designs them himself and is so into ink that he has tattooed his friends. Would you trust a friend or relative to do your body art (tattoo or piercing)? Or would you go to a licensed professional?
8) In 2018, when this song was popular, Sears filed for bankruptcy. In the 1970s, Sears was known as the place "Where America Shops." As of 2021, there were only 23 Sears stores left. Did you ever shop at Sears, either at the store or through the catalog?

9) Random question: What's your favorite way to spend an evening at home alone?

Thank you. Mine will be up in a few minutes.