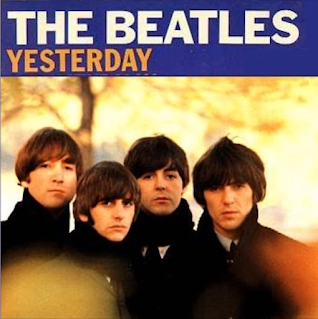 Unfamiliar with this week's song? Hear it here.

1) Paul McCartney sings that yesterday all his troubles seemed so far away. Can you recall a time when your life seemed carefree?

2) He has always insisted the melody to "Yesterday" came to him in a dream. Did you dream last night?

3) The lyrics were inspired, in part, by the death of Paul's mother when he was 14. Thirteen years later, he named his daughter Mary after her. Are you named after anyone? If you're a parent, did you name your children in honor of anyone?

4) Over the years, Paul has performed on bass, acoustic and electric guitars, keyboards and drums, but not the first instrument he owned: the trumpet. A present from his dad for his 14th birthday, he exchanged the trumpet for a guitar because, "you can't sing while playing the trumpet." Have you more recently a) exchanged a gift, b) donated a gift you didn't want to charity or c) regifted?

5) Paul grew up seeing how much his dad enjoyed placing a bet and then listening to the horse race from his favorite armchair in the living room, so he took his salary from making the film A Hard Day's Night and surprised his father with a racehorse. After father and son proudly watched Drake's Drum win at Liverpool's Aintree Racecourse, the horse retired to Paul's farm in Scotland. If money were no object, what gift would you give a loved one?

6) Paul is considered one of the world's wealthiest entertainers, worth an estimated $1.2 billion. This month, as he approaches his 80th birthday, he is winding up a 16-city North American tour, during which he performs 30+ songs in a 2 hour, 40 minute show. If you had all the money you needed, would you continue to work? Or would you kick back and relax?

7) Paul first joined the Beatles when he was recruited into the band by John Lennon. They met as teenagers when Paul showed up at a church picnic where John's band was performing. Paul recalls pedaling over on his bike to hear them, his guitar flung over this back. When did you most recently ride a bike?

8) Paul met his first wife, Linda, at a London club and then again four days later when she was a photographer at a press party for Sgt. Pepper's Lonely Heart's Club Band. Think about one of your romances. Where did you meet?

9) TV journalist Barbara Walters played matchmaker for Paul and his current wife, Nancy. During the summer of 2007, when Paul was vacationing in The Hamptons, Barbara repeatedly and intentionally invited them to the same parties and picnics. Have you had any success in a matchmaking scenario -- as either the matchmaker or one of the dates?

Be up later on.