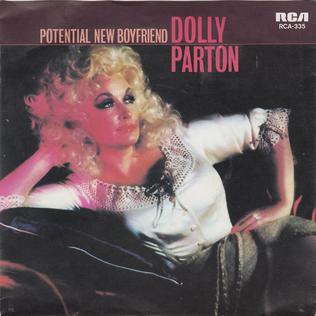 1) The lyrics tell us Dolly Parton has spotted a fella who twisted her ignition key and turned her motor on. That was in 1983. Keys are less common today, since many cars are equipped with with push button ignitions and more doors now open for those who know the key pad code or have the right swipe card. What's the last thing you used a key to start or unlock?
2) Her potential new boyfriend bought her a drink and she thanked him real sweet. Have you more recently said "thank you," or been thanked yourself?
3) This is Dolly's first music video. "Potential New Boyfriend" was a top 20 country hit and made #13 Billboard's Dance chart, yet it's not well remembered today. Share a song from one of your favorite artists that the rest of us Sat 9-ers might not know.
4) This is not Dolly's first song about a romantic rival. Her hit "Jolene" was inspired by a bank teller who regularly flirted with Dolly's real (not potential!) husband, Carl Dean. Have you recently fallen victim to the green-eyed monster of jealousy? If yes, what were you jealous of (someone's affections, possessions, success ...)?
5) Dolly enjoys telling interviewers she met Carl at the Wishy-Washy Laundromat in Nashville. Do you have a hamperful of dirty clothes awaiting you? Or are you all caught up with that particular household chore?
6) Dolly Parton's Imagination Library makes free books available to children. It was begun in 1995, and by 2020, her charity had distributed 150,000,000 books! When you were a very young reader, what was your favorite book?
7) Andy Warhol was fascinated by Dolly. When he asked her what her perfect meal would include, she responded it would have to start with chicken and dumpling soup. How would you have answered Andy? What's your perfect dinner menu?
8) Thinking of chicken ... In 1983, when this song was popular, McDonald's introduced McNuggets. Today, it's one of McDonald's most popular menu items. Are you a fan?
9) Random question: Would you rather visit a desert or a jungle?

Thanks, Gal! I'm going to be turning off comment moderation momentarily...